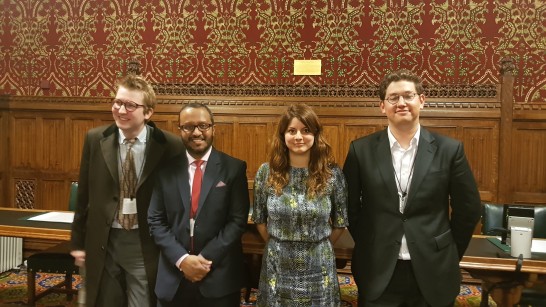 At the AGM of the Young Labour Lawyers (YLL) on 12 March 2018, I was delighted to have been elected as a vice chair for the coming year. The YLL is a part of the Society of Labour Lawyers. Many of my friends and comrades eqnuired if I still qualified as ‘young’ to which I replied that I am not exactly ‘old’. However, the name ‘Young Labour Lawyers’ is a bit of a misnomer, because it welcomes any legal practitioner with less than 10 years’ post qualification experience. It has nothing to do with age. Not surprisingly, the name of the organisation did come up at the AGM as an issue. I can see it featuring prominently in the forthcoming steering group meetings.

The Society of Labour Lawyers website published the following brief report of the AGM, which elected other officers to sit on the YLL steering group:

In her Chair’s report, Deeba Syed encouraged members to get involved with the SLL groups in the year ahead. She reviewed the year: from our well-attended Conference Event and annual dinner with Gloria de Piero MP; and signposted her plans for the months ahead, including: campaigning in Wandsworth, meetings with Labour MPs and assembling a team for the London Legal Walk.

After a strong challenge, Deeba was elected Chair for a second year and has pledged to concentrate on improving access to the legal profession.

Two Vice-Chairs were elected: Daniel Jones, who will focus on a mentoring scheme and arranging events, such as the SLL City Group’s launch on 21 March; and Khaled Moyeed, who will take the lead on improving YLL’s membership and outreach.

YLL’s new secretary is Axel Landin, who echoed the energy and enthusiasm in the room for lots more events with a panel focus.

YLL will meet for a steering committee meeting next week, on 20 March. If you have any ideas for events over the next year or can help us campaign on improving access to a career in law, please contact younglabourlawyers@gmail.com. We are particularly keen to increase the female representation on the committee.”