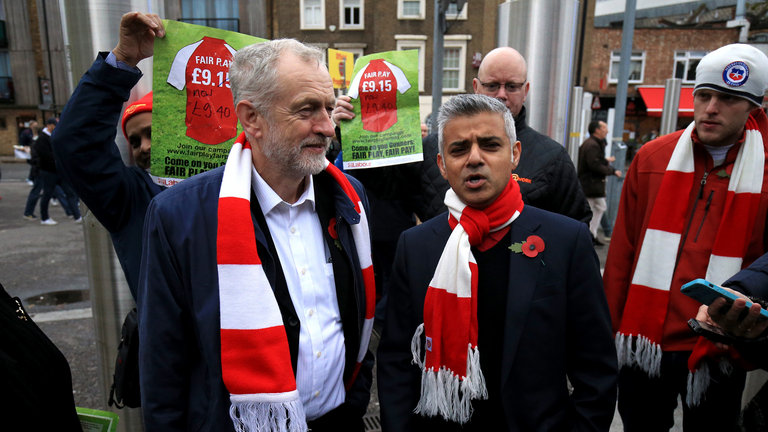 On Saturday [27 May 2017], Jeremy Corbyn was at Wembley stadium watching the FA Cup final as his beloved Arsenal took on Chelsea, who had just won the Premier League title with 18 points more than the Gunners.

Despite Arsenal’s status as the underdog, they were victorious on the day and carved out a convincing win. Probably referring to his own status as the “underdog”, Corbyn bantered with fellow Arsenal fan Robert Peston on Sunday remarking that “underdogs win!”.

Corbyn went into this election campaign as the ultimate “underdog”. His personal ratings compared to May were rock bottom with an IPSOS Mori survey showing the latter as the most popular leader of a political party in living memory. According to opinion polls, the Tories were as many as 24 points ahead of Labour and projected to win a 200-seat majority while Labour were facing a possible electoral wipe-out.

Fast forward a month and the political landscape has changed completely. Dubbed as “the worst Tory election campaign ever“, the Tories are in complete disarray with May’s personal ratings having taken a battering. Labour has closed the gap in the polls to five or six points and Corbyn’s personal ratings have risen. He is a far better campaigner than May. Despite the continued media onslaught against him from the right wing, people are warming to him. The more they see and hear from the man himself, the more they like him. His status as the “underdog” maybe a factor too.

There is something in the British psyche that we like to root for the underdog. The success of Anne Widdecombe – the right winger with two left feet – on Strictly Come Dancing is a classic example. Susan Boyle, an unemployed former cook, is another who took to the nation’s hearts on Britain’s Got Talent and her first album became the fastest selling debut album in British history.

In political terms, the greatest “underdog” of them all was Clement Attlee who was openly derided by those within the Labour Party, and outside it. Left-leaning publications such as the Tribune and New Statesman were also critical of him. Winston Churchill branded him as a “modest man who had much to be modest about”. However, Attlee went onto defy his critics winning the 1945 election and bringing in much needed social reforms to rebuild post-war Britain. A recent study at Leeds University ranked Attlee as the greatest post-war prime minister.

Corbyn has been likened to Attlee in the way that the former is also derided in the media. Like Attlee, Corbyn has put forward a series of bold pledges in his manifesto to transform Britain in the aftermath of the recent global economic downturn. The popularity of the leader today may not be truly reflected in opinion polls, because of “Shy corbynites” – those who may not admit to liking him given the public derision towards him, but who may vote for him in the privacy of the polling booth. A survey found that people overwhelmingly support policies in Labour manifesto. “Shy voters” is a recent phenomenon that is said to have delivered a victory for Trump in America and Brexit in the UK.

The latest narrowing in the polls between the Tories and Labour has been credited to women surging towards Corbyn. Also, some two million young people under the age of 35 registered to vote before the deadline on May 22. Labour has the strongest support amongst young voters. If 30 per cent more young people vote for Labour, the Tories could lose this election. Corbyn has won the backing of a number of high profile artists who are popular among young people. Young voters are also likely to be attracted to Corbyn’s “underdog” status.

Corbyn knows all about how to win from the position of an underdog. He was a 200-1 outsider to win the Labour leadership in 2015, but beat his rivals convincingly. With less than 10 days to go before the polling day, Corbyn is not only being viewed as a serious contender, he has sent the Tories into panic mode.

Back to the FA Cup final. The colours represented by the teams, Arsenal in red overcoming blue Chelsea, could be a good omen. If Corbyn carves out victory on June 8 it would be the greatest underdog success story yet.